Our graduation ceremony saw five graduates who studied under Hiroshi Yamamoto, sumi-e instructor at the Japanese Canadian Cultural Centre, register their seals with the Sumi-e Artists of Canada. We were also fortunate in seeing their test pieces, which are created at the end of their sumi-e painting studies. The traditional ceremony included some fundraising for the Sumi-e Artists of Canada making it a lively event for both the artists joining the organization and fellow members and friends.

Helen Devereux, shown below, chose a Canadian theme for her test piece, as did several graduates. In fact, a look at test pieces in recent years shows many paintings with landscapes set in Canada. 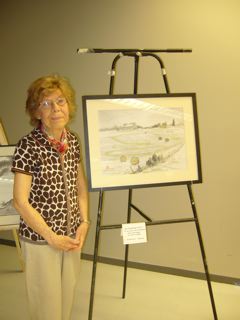 The rolls of wheat, the barn, fences and trees in this farm setting make this painting a study of Canadiana. 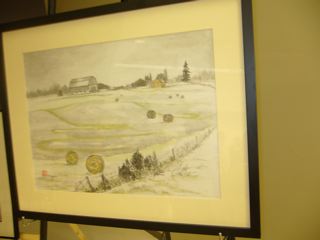 Deborah Johnston also chose a northern Ontario theme. These pines, rocks and lake could remind a viewer of many a lake he has paddled across in his canoe. 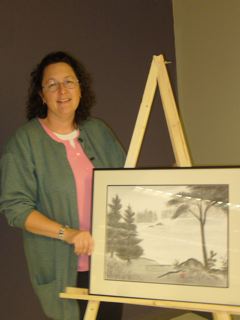 A closer look shows a scene many of us may have witnessed at a cottage or camp site with water leading away to distant islands. 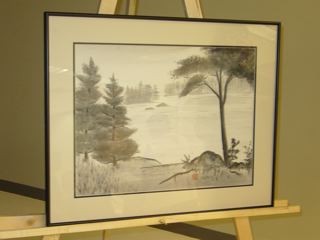 Fumiko Kumagai's landscape featured a collection of trees that dominated the foreground. 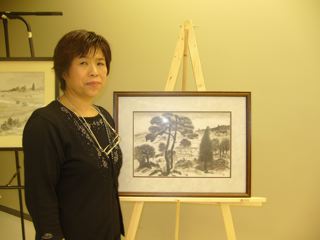 A closer look shows the details of various trees in an intriguing landscape about a house nested within. 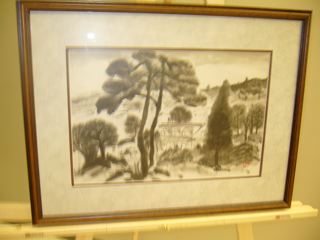 Gail Pahwa's work had a fascinating blend of eastern and western natural images, leaving the viewer in an almost mystical world. A careful mix of grays and blacks makes the trees and rocks in the foreground stand out while the eye is still drawn to a background of forest and mountain. 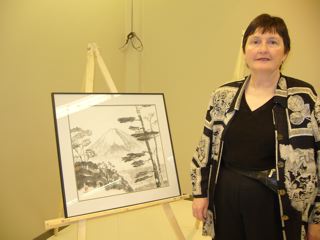 In this closer view, we see a mountain similar to Mount Fuji, yet more angular, and trees and bushes with an oriental feel and yet they might also be found right here in Canada, perhaps looking to the Rockies. 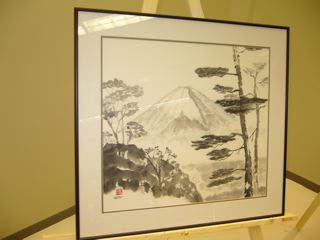 Tokugi Suyama painted a classic sumi-e landscape with a foreground of trees, a distant home separated by water, forest and mountains. 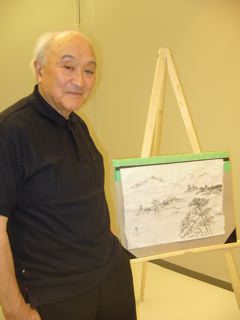 A closer look reveals an interesting spacing of natural elements mixed with homes and a fisherman, following the tradition of making man a small part of the natural world. 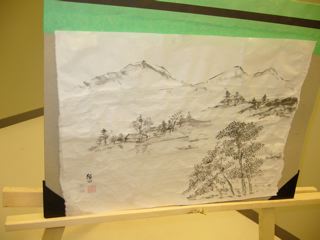 A sixth graduate, Maggie Cain, unfortunately could not attend the ceremony. However, like all preceding graduates, Maggie was offered the one-year free membership to the Sumi-e Artists of Canada and we look forward to seeing Maggie at our workshops.

One of Japan's greatest sumi-e painters, Sesshu, created works that are regarded as masterpieces of the 15th century. Helen Devereux presented her recreation of a well-known Sesshu landscape capturing Sesshu's unique style. 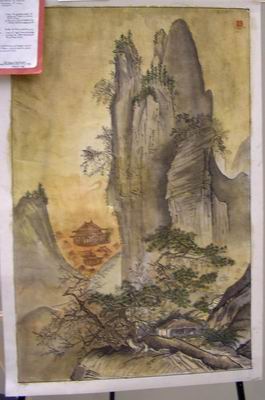 When you graduate from a sumi-e painting course, typically after five or more years, you paint a test piece, as shown previously, and you receive a seal.  The graduates imprinted their seals on the Sumi-e Artists of Canada registry. Reading left-to-right, you can see their names, their seal in red, the meaning of the seal (typically a brief poetic phrase) and the name of the seal in Japanese.

All graduates joined Gary Bist, President of the Sumi-e Artists of Canada, for a picture. 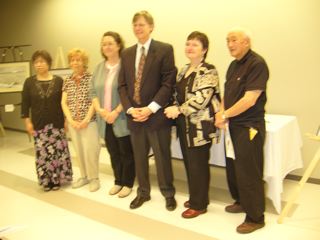 A presentation followed by the executive. These volunteers organize the workshops and membership, handle the finances, publicity and events like the graduation, and prepare and serve the sushi and deserts at this fundraiser, the tea room at the annual show and the workshops. They notify other members when workshops are imminent and remind all members of the developmental role this art plays in our lives through the newsletter and web site.

George Nakamura, Treasurer, reported a positive balance sheet of $7,436. Sumie Takashima, Membership, reported 79 paid members. Our six new members bring the total to 85. Moira Mudie, Professional Development, reported that Roslyn Levin will return to lead a workshop on cats in September. Our 25th annual show for November is in the planning stages. A special December holiday luncheon is planned in honour of our 25th year.

There was positive feedback on our newsletter (Penny McCrae, Editor) from members. Penny's use of colour was particularly appreciated though, of course, there is a tradeoff of increased cost. Our publicity (Diana Bullock, Publicity) continues mostly through the Internet where Diana has found many creative avenues to publicize our events. The Phone Committee (Connie Bist, Chairperson) continues to remind our members of events supplemented by email reminders and our web site. Adrienne Arvidson, Recording Secretary, recorded the minutes of this session as Adrienne captures the minutes of each session.

Any expense covered by the Sumi-e Artists of Canada must be approved by the executive. At the graduation ceremony approval was requested and granted to send a donation of $100 to the Sumi-e Society of America. Originally, our organization was a Canadian chapter of the Sumi-e Society of America, as discussed in our history, and we continue to maintain good relations with this world-renowned organization. Moira Mudie is our liason.

Members were told that though we have a growing membership we should be cautious as costs, such as the rental of rooms at the JCCC, are rising, in some cases, significantly. Members were encouraged to join the executive if they can spare some hours over the year. We always need volunteers to keep the Sumi-e Artists of Canada growing.

Kathy Matsushita then led the attendees on a fun fundraiser. Members contributed the prizes and all attendees could purchase tickets, which, when drawn allowed them to choose a prize. Proceeds went to the Sumi-e Artists of Canada. 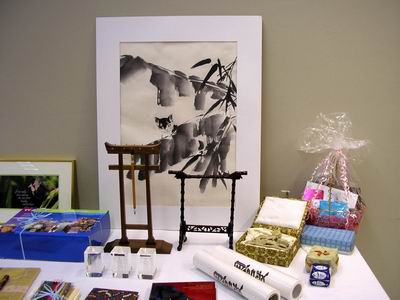 Attendees of the graduation ceremony looked over the prizes throughout the ceremony and knew exactly the one they wanted. 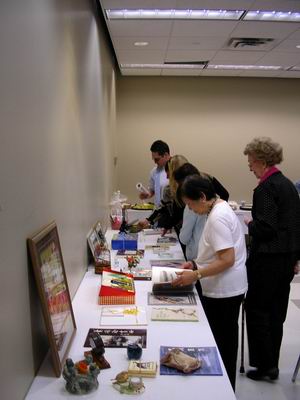 Linda Nakatsu and Dianne Kitazaki provided refreshments as the formal part of the graduation ceremony and fundraiser closed and members and guests lingered for conversation. 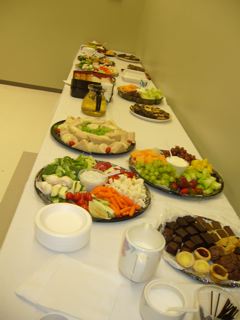 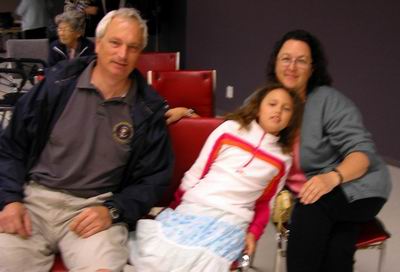 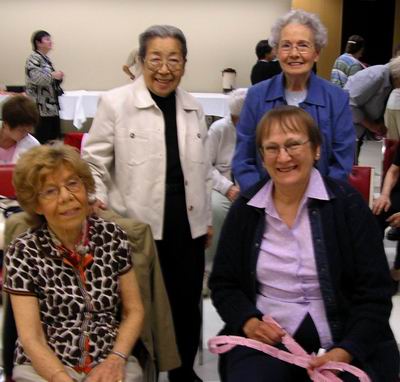 We congratulate all the graduates and look forward to seeing them participating in our workshops, shows and helping out in our volunteer activities.