Landscapes form one of the traditional areas of study for sumi-e artists. Students study landscapes and then later, as artists with their seals, keep on studying landscapes. In fact, many of the classic sumi-e paintings of Japan are landscapes with only a bridge or boat to remind us of the role of people. Well-known instructor David Hu returned workshop participants to the landscape when he opened his workshop by showing pictures by the Four Wongs, a family famous in Chinese antiquity for their paintings. One of these paintings was the basis for the workshop. 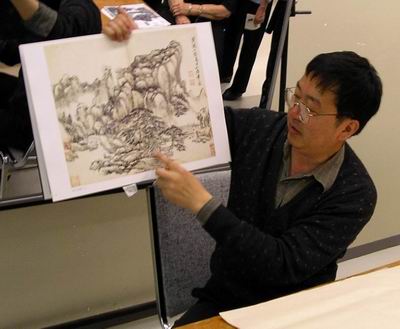 David offered participants a number of photocopies, which was handy especially later when they would try their own hand at a landscape. 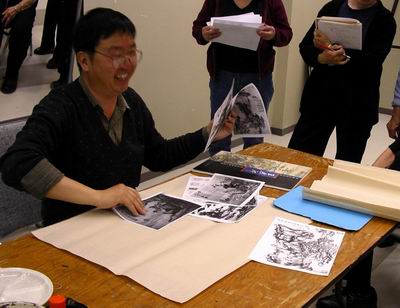 A close-up of the handout that workshop participants used as a guide for their landscape shows how complicated landscapes can be. 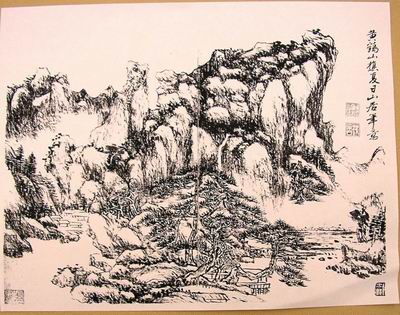 David Hu used only a few brushes and mostly sumi-e ink to create his landscape, though some colour was added later. He began with a medium-sized brush. 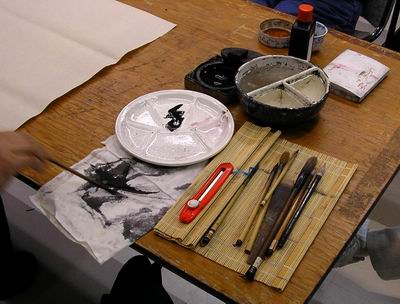 David began by examining a section of the landscape he would use to form the center of the painting closest to the user. It was three pine trees. 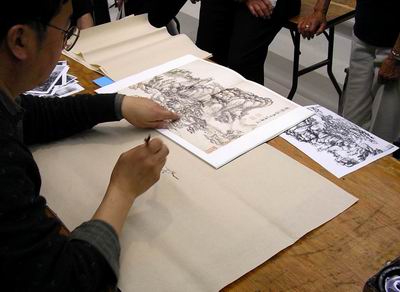 David first outlined the trunks and branches of the trees and then added some details to them. 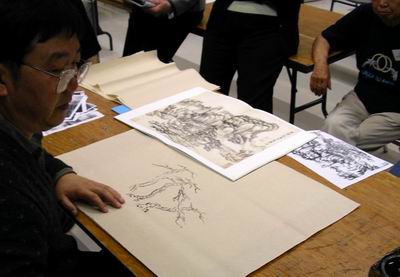 Next came the pine needles created in five pointed strokes per cluster of pine needles. David painted large needles, which stood out dramatically in on the painting. Getting just the right balance of groups of pine needles is the challenge in drawing them. 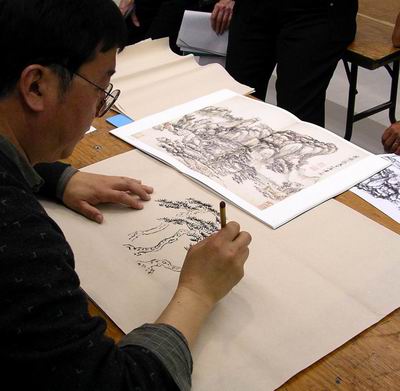 David continued working on more pine needles in the lower branches of the trees. With darker ink, he highlighted some of the features in the trees. 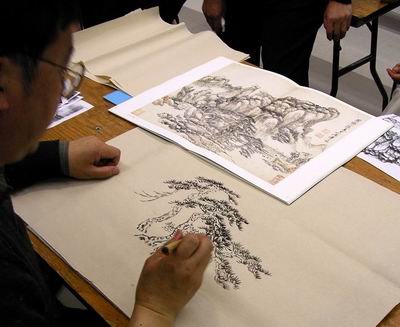 David completed the trees by adding some bushes behind the trees. We could not quite identify the bushes, but David Hu told us they are used for creating soap in China. 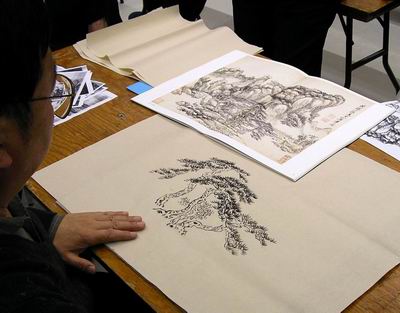 Then it was our turn to draw the trees aided by the handout given to the workshop participants earlier. David Hu came around to make corrections and suggestions. 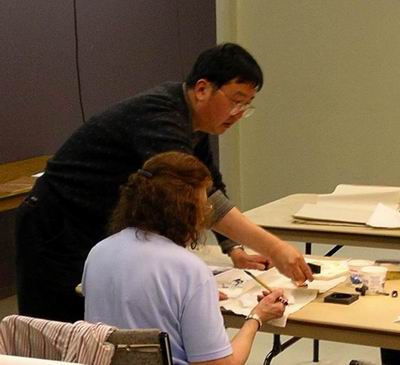 Participants in the workshop returned after creating their trees to watch David next turn his attention to the addition of the foreground and background, which would create the entire landscape. 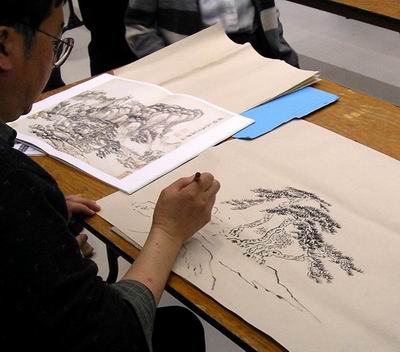 Next came the outline of the mountains in the background.. 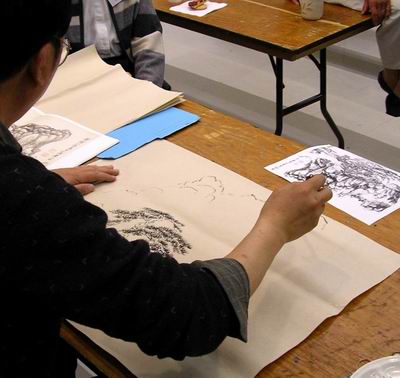 At this point the outline was complete. 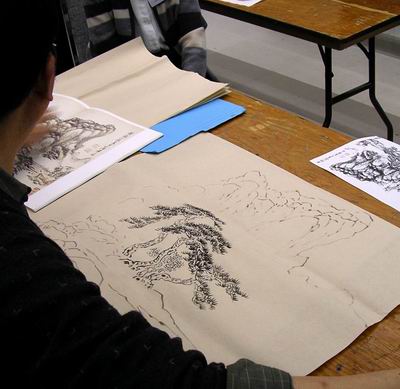 David started to add details and fill in the foreground. 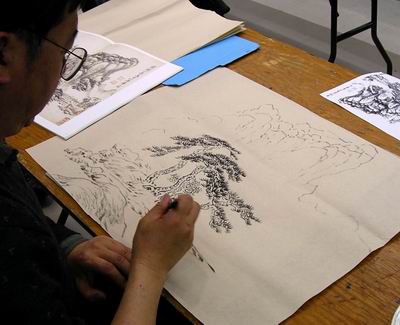 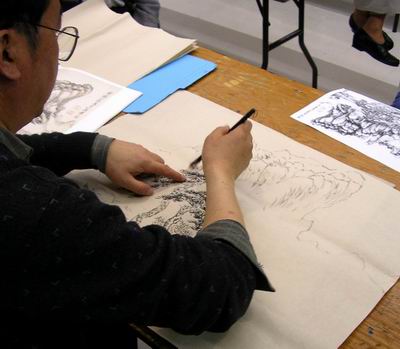 At this point, the structure of the painting and some details of the foreground and background had been created. 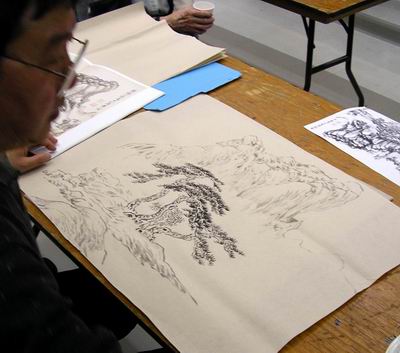 David returned to the foreground and used dark black sumi-e ink to highlight the rocks. 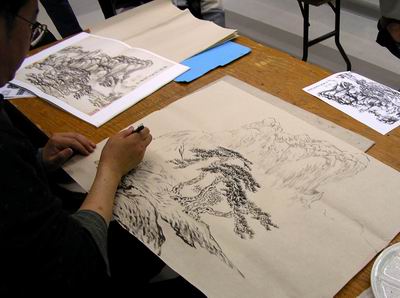 Similarly, highlighting was added to the background mountains making them more definite and bringing them into the picture in a more dramatic way. 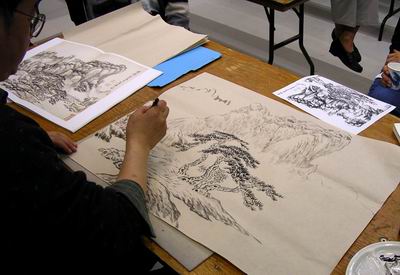 It was our turn again. Like David Hu, workshop participants added the foreground rocks and background mountains and subsequent highlighting. 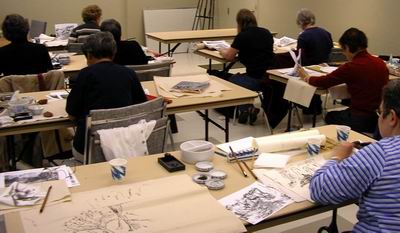 David Hu returned to finish his painting by adding colour to it. Burnt sienna and indigo with some sumi-e ink mixed into each container of colour was all that was needed. 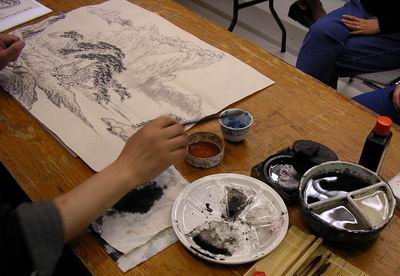 David began with the trees, colouring them with burnt sienna. A workshop participant asked how David could continually paint and only occasionally get some ink. David replied that he would occasionally turn the brush, which allows the ink to last longer. 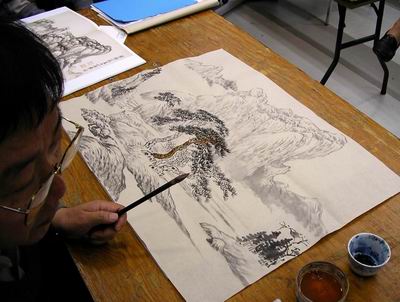 The tree trunks and branches continued to be coloured in burnt sienna. David used a double brush technique, one with the burnt sienna and one with only water. 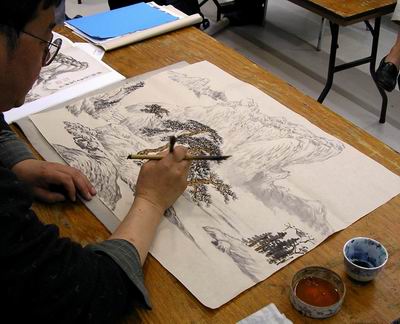 Then David added indigo over the pine needles with a medium-sized brush. 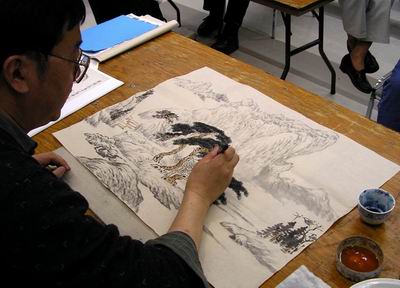 The indigo is used primarily for the pines but it can also be used with restraint to colour water and sky. 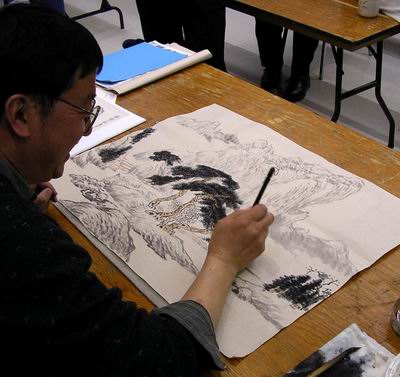 David used a large brush with more water to fill in the earth and, afterwards, the mountain. These particular old mountains in China, David told workshop participants, are covered in earth. David Hu himself lived many years in mainland China. 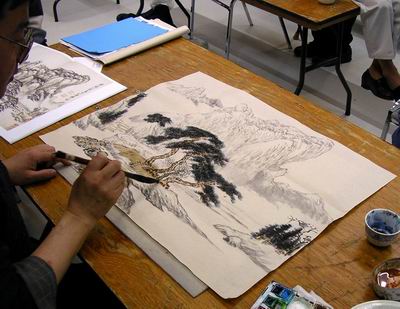 The background mountains were drawn with the large brush next. Lots of water is added to the brush to lighten the tone of the burnt sienna. 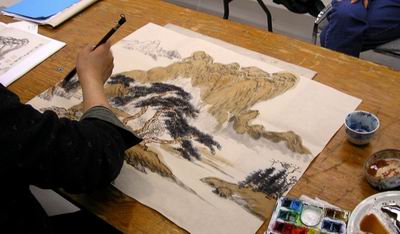 The colouring was now complete and the painting was very wet. The traditional way of drying such a painting is to leave it alone and let it dry, which is what happened in the workshop as workshop participants returned to work on colouring their paintings. The not so traditional way if you are in a rush: use a hair dryer! 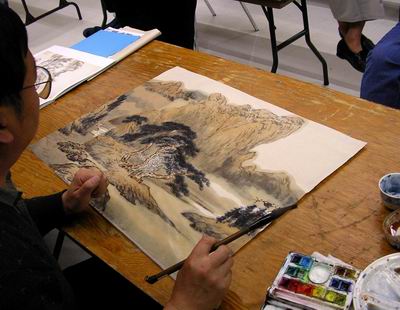 David Hu and the workshop participants returned to David's demonstration. The painting, now dry, presented a more realistic painting as the colour had faded and the black sumi-e ink emerged to define the painting. David Hu, ever the perfectionist artist and instructor, added a few final touches. 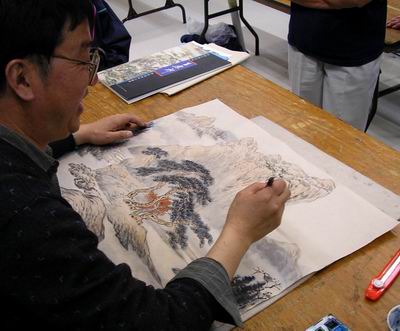