Roslyn Levin's classic sumi-e style using simple, elegant lines to express nature has fascinated many art lovers who have seen her paintings at our annual show and many other shows across Canada. In this workshop, Roslyn turned to a subject she has studied for years, cranes, distilling their essence to only a few strokes. Roslyn began by handing out copies of her cranes for workshop participants to study. 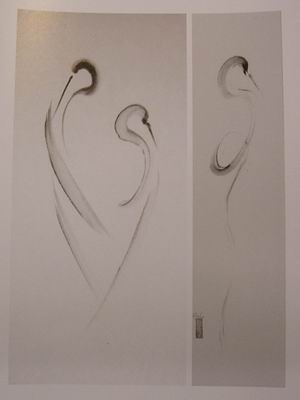 Roslyn then demonstrated how she paints cranes. As shown below, Roslyn works primarily with sumi-e ink on paper. There was no colour at all used in this workshop. An ink stone, a test pad of paper, water, and a cloth to take out excess water from the brush are all that Roslyn uses in addition to her brush and paper. Roslyn prefers a more absorbent paper, which she offered to workshop participants. Although Roslyn has a wide range of brushes, including an interesting one in which the bristles themselves are made of bamboo, in this workshop Roslyn painted with the one shown in these photos. 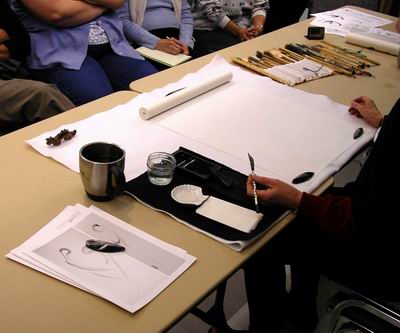 Roslyn literally breathes into her work and demonstrated to workshop participants that using your body and breath while painting creates a powerful, expressive effect on the brush stokes. The unification of body, breath and art, as Roslyn explained at the workshop, came from studies with an influential teacher, Tomoko Kodama, and her studies in Qigong, an art similar to Tai Chi. 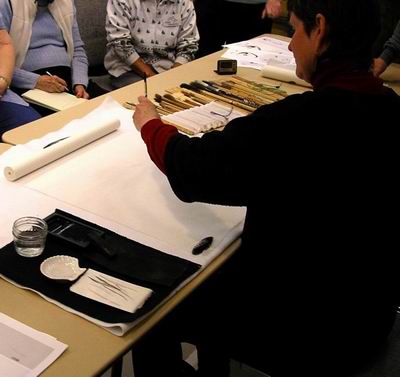 In the first crane shown below, Roslyn used two brush strokes: a continuous stroke starting at the head and proceeding downwards to the body with some pauses and twists, and the bill. 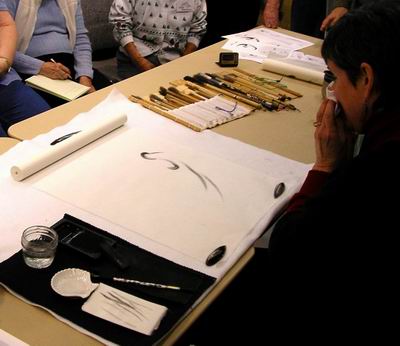 A second crane followed using a similar technique. Roslyn paints almost continuously during a demonstration, studying a creation and then moving on. 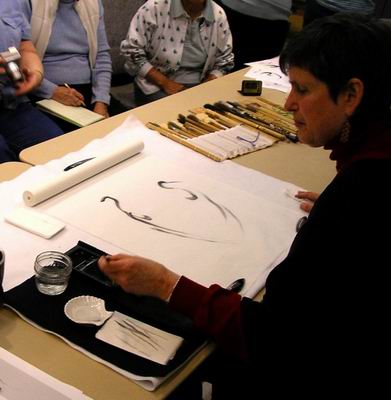 Several more cranes were painted using the simplicity of one or two strokes. Roslyn explained to workshop participants that her observation of cranes and her experimentation in drawing them led to simpler and simpler representations of them. As Roslyn studied cranes, their nature became a part of herself. As Roslyn put it, when you paint "You are the crane." 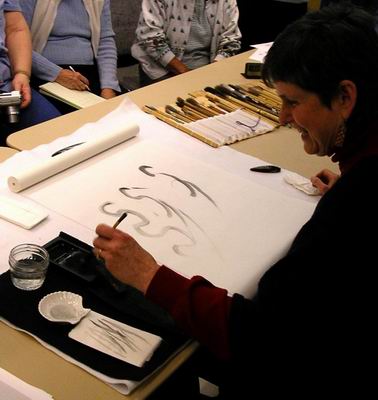 Roslyn draws parts of her paintings separately to study and develop particular aspects.  The legs of the crane can be mastered by drawing them on their own and working on proportion and separation at the joint. Below, Roslyn shows that a leg is done in one stroke, briefly lifting the brush at the joint. The art is knowing how much pressure to apply as you paint and judging the right amount of ink and speed of the stroke. 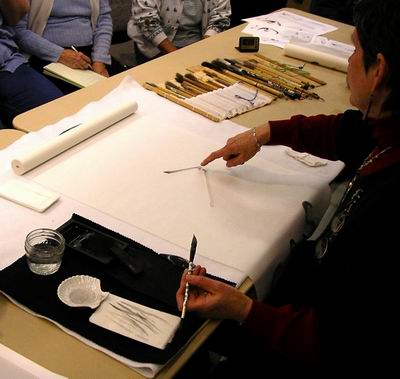 Several more legs and feet followed, both in standing and flying positions. 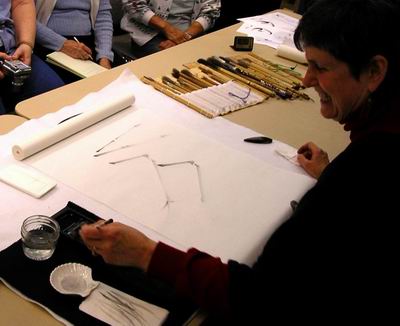 Roslyn next painted a crane with legs. Starting in her contemplative way, Roslyn positioned the brush over the paper. 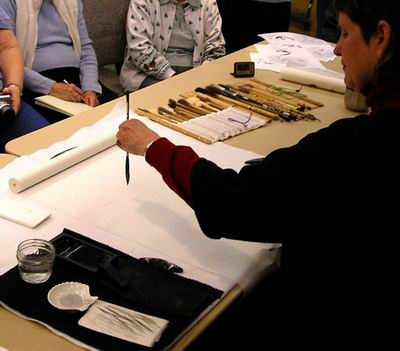 The S-like body is drawn starting at the head. 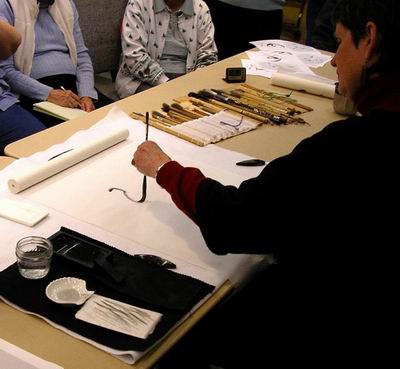 Lifting her brush, Roslyn then continues with the back of the bird. 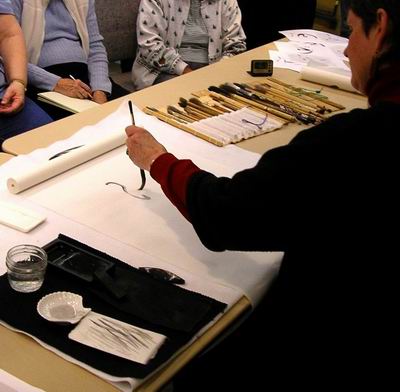 The legs are added in a well-known stance of the crane, by another stroke. 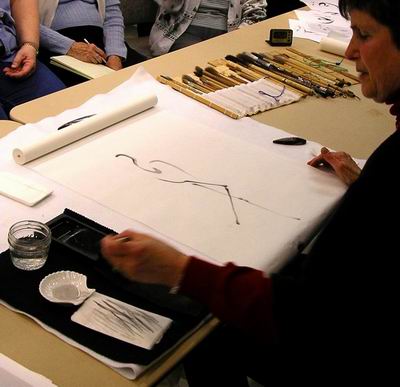 Roslyn continues to learn about cranes and explore her expressions in sumi-e of them. One recent exploration Roslyn has begun is painting a male-female pair. In the photo below, the male crane has been created in one stroke and Roslyn has started the female. 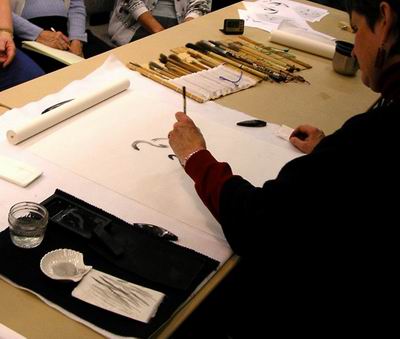 The female is added with a wing extended to create a pair of cranes and the relationship between them. 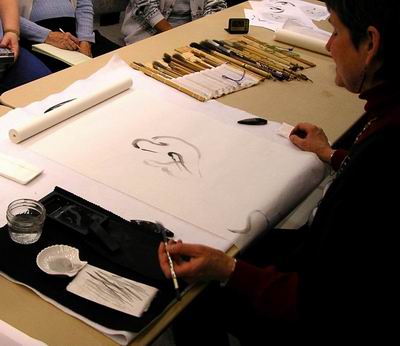 Roslyn has an engaging instructional style and workshop participants learn through interacting with Roslyn as she demonstrates, observing her techniques, and, later, practicing the brush strokes themselves. 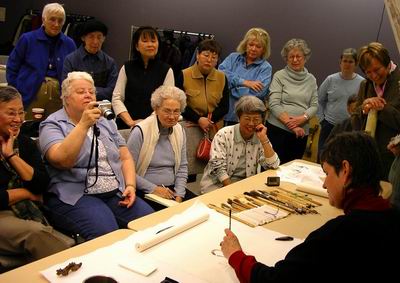 Sometimes, one stroke is not enough, particularly when emphasis is needed in the painting. Roslyn then paints over the initial bush stroke adding darker ink in the places Roslyn wants to highlight. 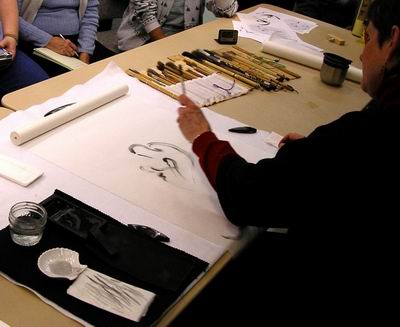 In this handout from Roslyn, some highlighting in darker ink brings out the character of the crane. Adding the crest to the bird on the right, turns this crane into a heron. 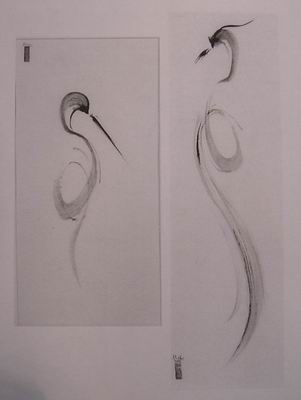 Roslyn also demonstrated painting flying birds. In the photo below, a crest has been added to turn the crane into a heron. Similar to the standing cranes, the head, body and wings are done in a continuous brush stroke. Then the legs and bill are added. 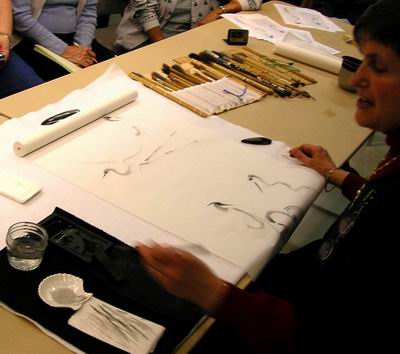 A handout from Roslyn shows a crane in flight. 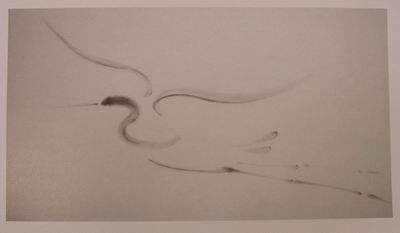 Roslyn demonstrated another flying bird. In this one the head and neck starts at the right of the paper and Roslyn has stopped at the start of the body. 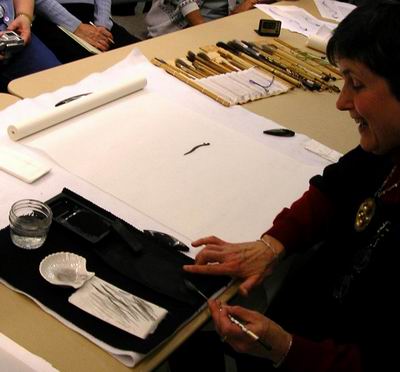 The body, wings, legs and bill complete the flying crane using darker ink in places for emphasis. Roslyn periodically examines her paintings as she creates them. One criteria Roslyn uses when deciding to mount and frame a painting of a crane for sale is that the crane should have a unique character to it. 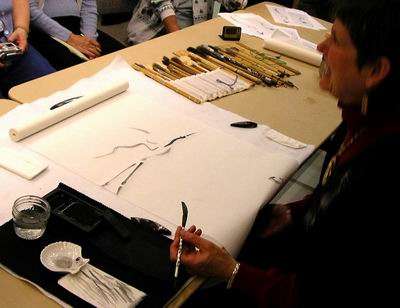 Completing her demonstration, Roslyn returned to the original painting that she wanted workshop participants to paint themselves. 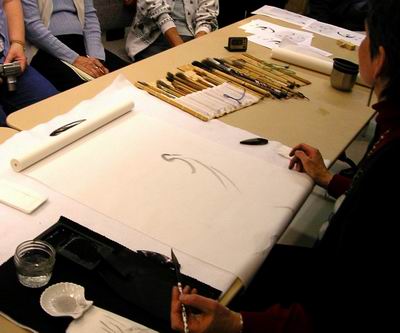 Some diversions at this point were shown by Roslyn. A cat was created using the similar simple, sparse brush strokes. The face of a bear was drawn and Roslyn commented that after studying the face of the bear, she began to eliminate the mouth. Often that is the process that Roslyn uses: starting with a subject that has many brush strokes and then gradually eliminating brush strokes until the minimum that is needed to convey the subject emerges. 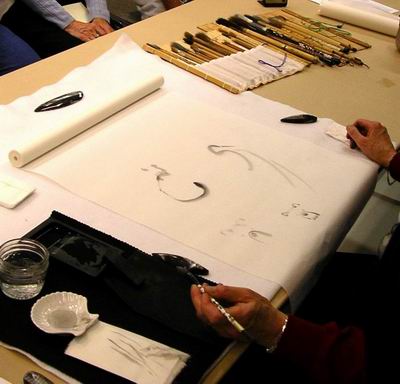 Roslyn also painted a tree to show her approach used on other subjects. Then one last crane. 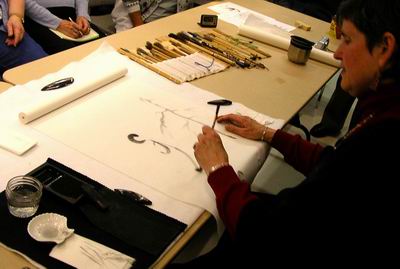 It was our turn. Many workshop participants took Roslyn's advice on using the body and breath to paint, standing to work on their cranes.

Roslyn came around for one-on-one suggestions to the participants. Below, a workshop participant has drawn a series of cranes based on the demonstration and handouts. 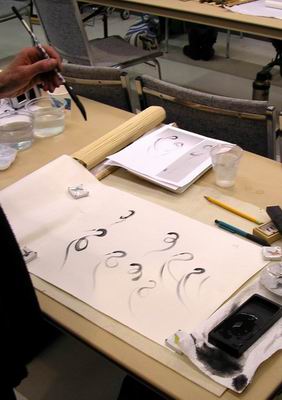 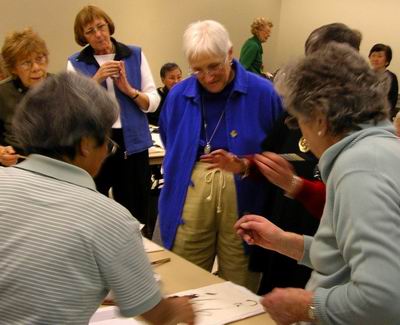 Roslyn also had several of her completed paintings on display to study such as this flying crane.