Twisting, gnarled vines adorned with spectacular flowers like wisteria are a staple image of sumi-e brush painting. They remain, however, a challenge each time you pick up the brush. One person who has studied vines and their flowers for many years from right outside his Lindsay, Ontario studio is popular instructor Charles Leung. Charles led us on a fascinating outdoor workshop last year, where we learned first hand why Charles' motto is: Nature is our best teacher. This year vines and the wisteria flower were Charles' subject.

Charles began the workshop with a discussion on brushes and paper suitable for this type of painting. Specifically, a medium-size brush that resolves to a point can be used for the entire painting. These brushes were for sale for those of us without one. Charles also recommended his favourite brush, which has bristles gathered from the ear of a bull. This type of brush is harder to find. For paper, Charles recommended a thin paper, which allows the flowers to diffuse more with the medium. 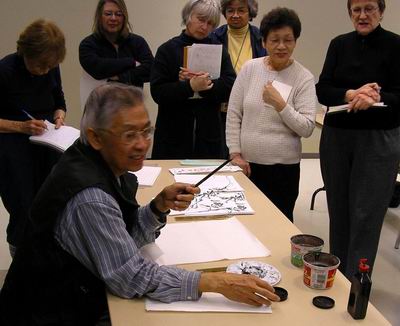 There are two types of vines, Charles reminded us. The first type of vine is perennial; it grows year upon year. The branch of this vine becomes more gnarled and twisted with age. The second type of vine is an annual, appearing once a year. The branch of this vine is thinner and less twisted. Charles told us we would learn to paint both in this workshop.

The older, gnarled vine was the first painting that Charles demonstrated. In addition, Charles brought instructions on how to create the branch, so that we could remember the technique in the future. 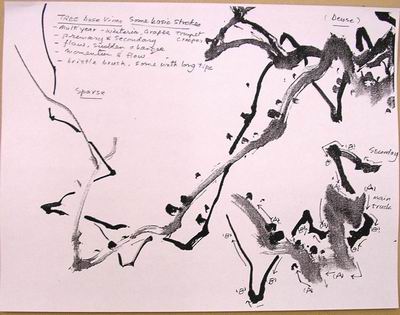 Charles drew several test brush strokes on a test piece of paper he keeps to the side of the painting. He recommended this practice to the artists gathered at the workshop. The initial brush stroke is done in one continuous line. The brush is loaded with black ink. The stroke is thick and broken with knots to indicate the age of the branch. 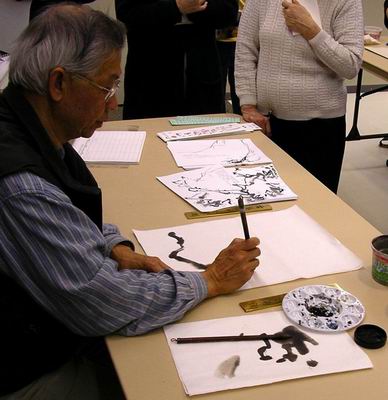 You may run out of ink in creating the branch. When that happens, Charles suggested simply getting some more ink and continuing the branch. 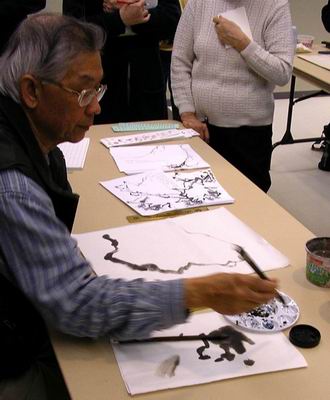 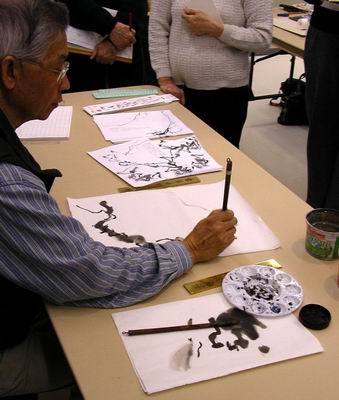 The completed branch should be expressive but not totally fill or dominate the painting.  There must be room for the wisteria, which will be added later. 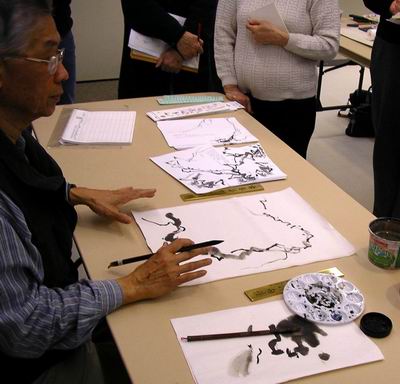 This close-up look at Charles' painting shows the contrast of the darker and lighter tones of black ink. 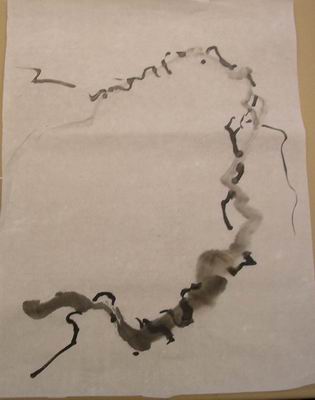 Charles next demonstrated the annual vine. He provided some instructions for painting the branches for this vine too. The branch for the annual is thinner and has less twisting similar to young branches that one finds on trees in the spring. 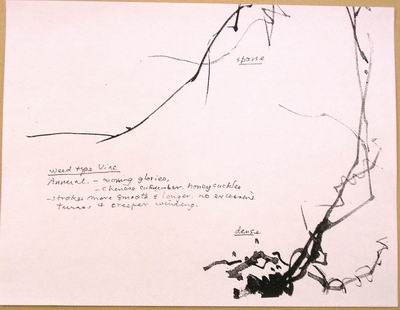 Similar to the first painting, the initial brush stroke is with black ink and forms a continuous line. The branch is not as thick, so a brush with a point will work well for this thin branch. There are few twists, just long straight strokes that lead to notches and then more straight strokes. 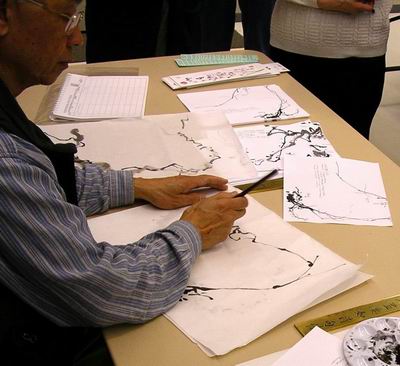 A secondary, very thin vine is added in a lighter tone. 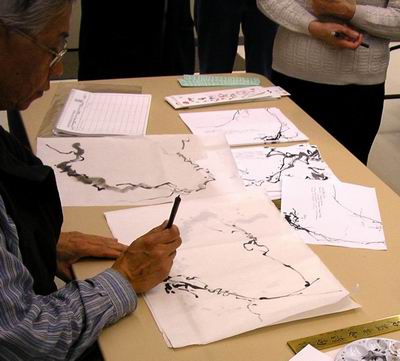 The completed painting of the branch shows a similar layout to the first painting, which in the picture below is beside it, but the branch is more youthful and has more of a spring. 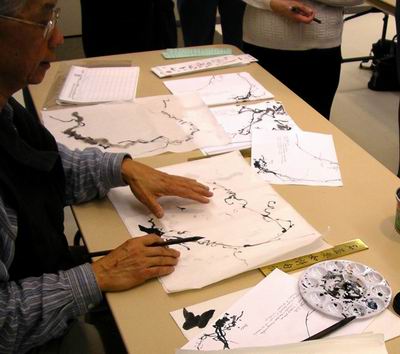 A close-up look of Charles' painting reveals a delicate vine. 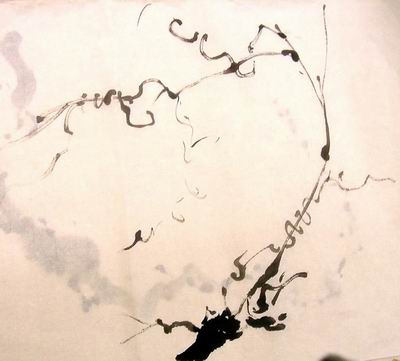 Then it was our turn. Charles had the workshop participants paint the branches and then provided advice one-on-one. 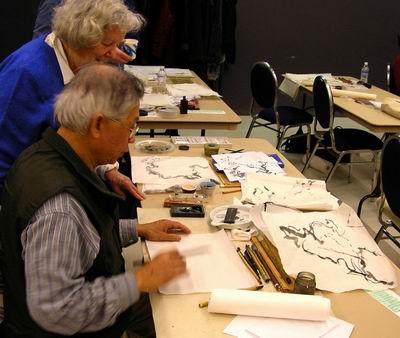 One tip Charles offered artists was to sketch a miniature of the painting. This technique lets you judge how to use the space of the painting effectively before you get wrapped up in the details of the work. 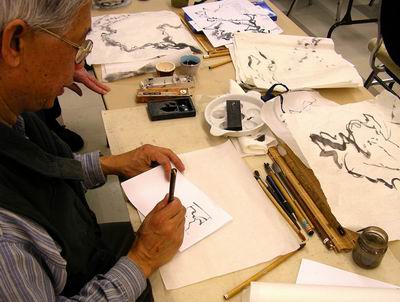 This miniature sketch gives the artist an idea of the interplay between the wisteria flower and the branch so that in the real painting the two will complement each other effectively. 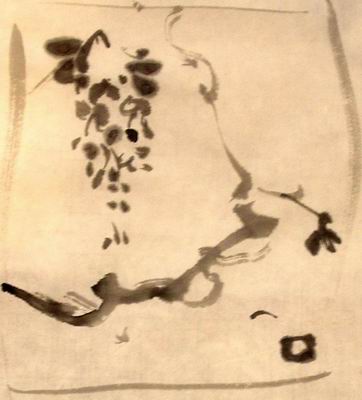 Charles returned to demonstrate painting the wisteria. To get the right colour for the flower involves some experimenting with a blue or purple and a white. Charles uses the Pelican white brand. To make the flower more luminescent, Charles suggested dipping the tip of the brush in water before painting the petal. 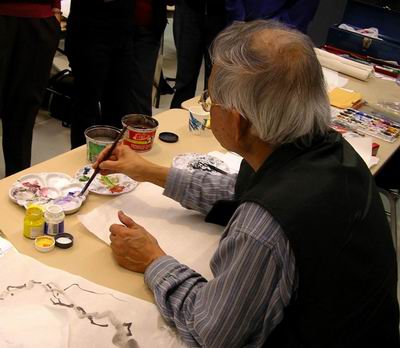 As with the branches, Charles suggested testing the colour and brush stroke before painting the actual wisteria flower. 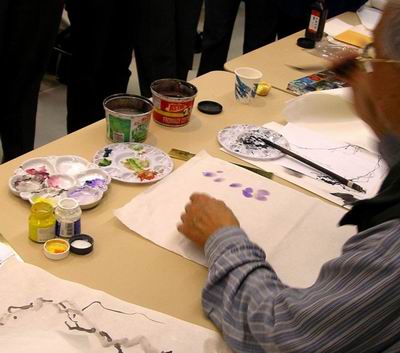 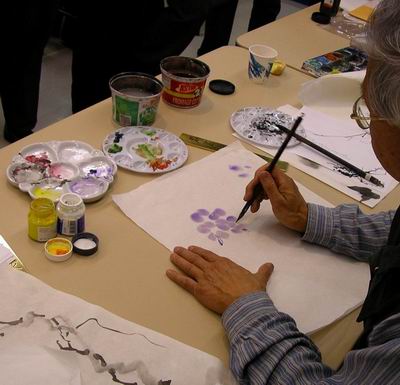 The yellow centre of the petal is added afterwards. 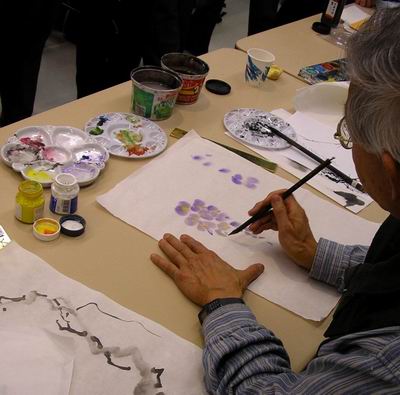 At the lower end of the wisteria, younger, darker buds are added. 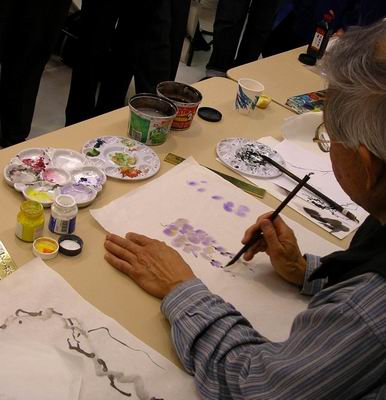 Leaves are added above the wisteria. 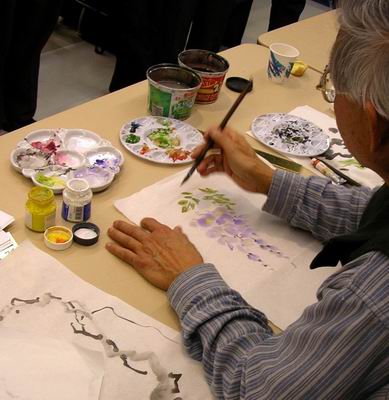 Branches are then added to tie the flowers and leaves together and provide a link to the original branches created earlier. 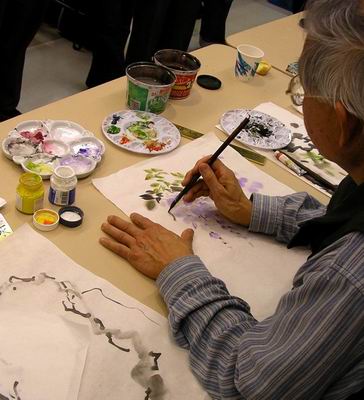 A butterfly is worked into the painting to add another element to the picture and offset the plant. 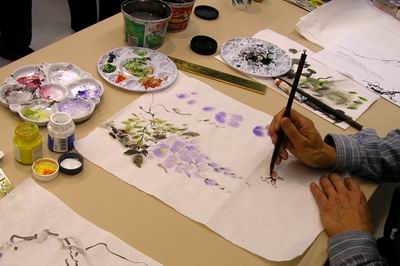 It was our turn again. This time we had to create the wisteria and add it to our earlier painting of the branch to create a complete painting. Charles again provided helpful advice to all the participants. 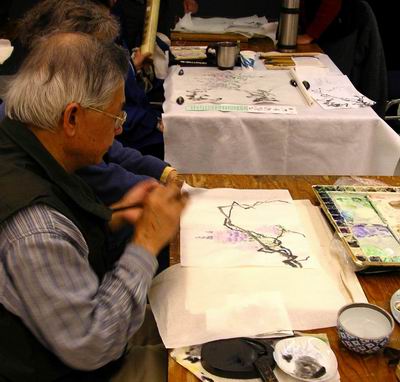 Some of Charles Leung's work was on display including this work of swans and wisteria. 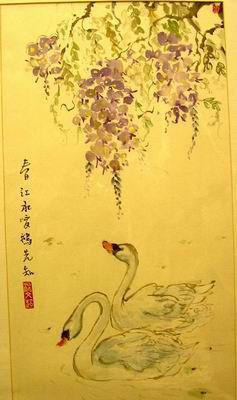 Other paintings of vines with different flowers were also hung for viewing. 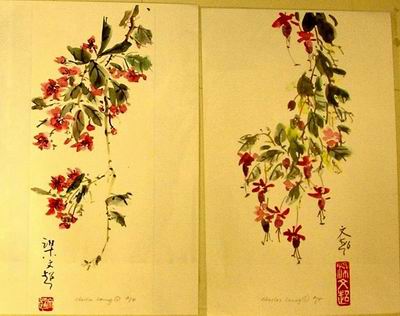 We were all given a gift from Charles. A bookmark that was itself a work of art! The bookmark was inscribed with Charles' motto: Nature is our best teacher.

You can find more information on Charles Leung in the links section.