Paperwhites, a symbol of spring, have long stems, graceful leaves and are sweet smelling. They look like miniature daffodils and make a striking painting. But they are also a challenge to paint. Moira Mudie, our instructor, helped us by presenting a structured workshop that revealed the building blocks essential to the creation of a paperwhite painting.

Moira brought several paperwhites with her, which were helpful when checking details like how many petals should each flower have (six) as well as proportions and colours. 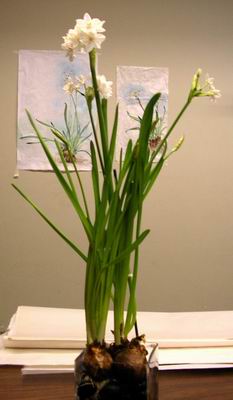 Moira also provided participants of the workshop with printed instructions, which followed the presentation by Moira herself. Instructions are always helpful, especially when the workshop is over and you're trying to paint the flower again a year later. 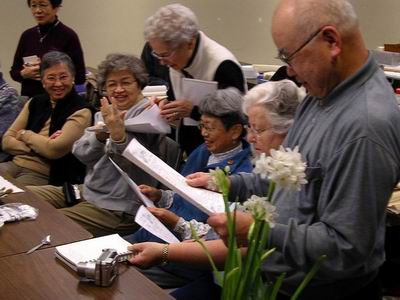 The instructions were a work of art in themselves! They revealed the flow of painting the paperwhite from the bulb to the flower, the direction of strokes, and tips like the number of petals and their appearance at various angles. 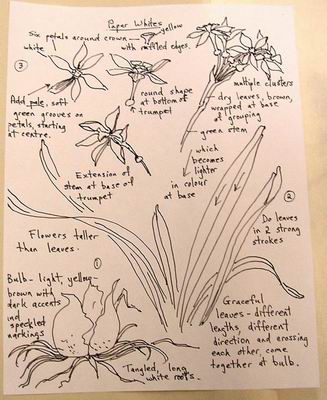 Moira began with bulb. It is painted using burnt sienna with some black ink on the tip in a few strokes using the side of the brush. Moira added some roots descending from the bulb in black. 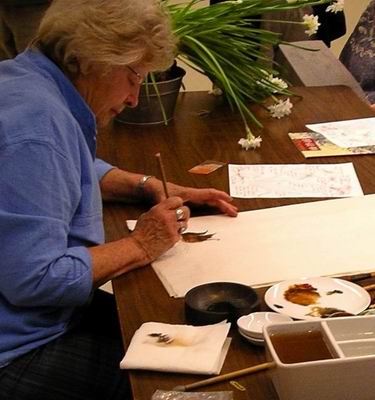 The stems come next. They are quite long as is evident from the flower itself. 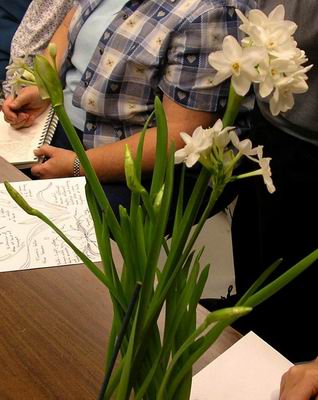 Moira first spent time creating the right colour of green from several green paints in her art supplies. Also, Moira suggested using some cobalt blue and yellow as you experiment to get a vibrant green. Note the bowls of green in the picture below. Then Moira drew a stem in a single stroke from the top to the bulb. 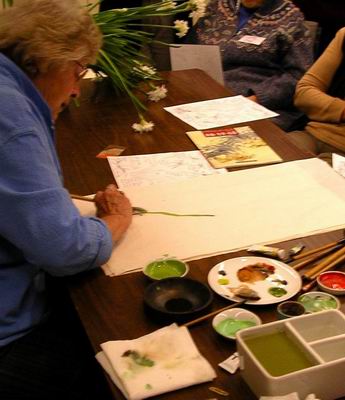 The first stem was followed by others including some that crossed over to create a natural looking flower. 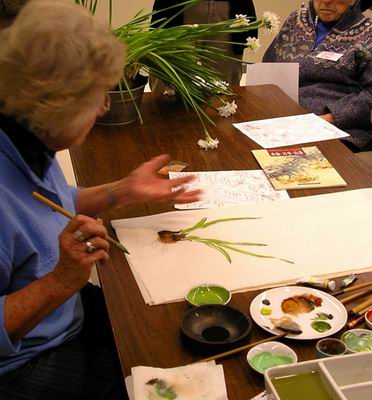 With the bulb and stems painted, Moira turned to the flowers which are quite high up in the paperwhite. They are, of course, white with yellow stamens in the centre. 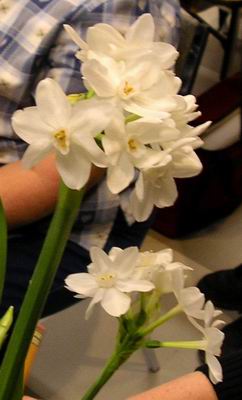 Moira began by dotting the painting with the yellow centres and then adding the petals about them. There are six petals to each flower. The yellow dots will decide how the petals will appear. Usually some are at the forefront and overlay petals to the back. Some are folded. The petals are created with a fine brush with a gray ink. Note the distance from the stems. 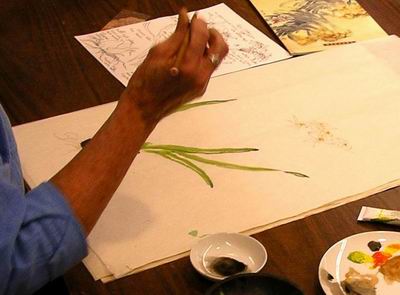 The distance is needed to accommodate the calyx and sepals of the paperwhite flower as shown by examining the flower itself. The calyx is like a container at the top of the stem and the sepals are the green short stems reaching from the calyx to the flower. 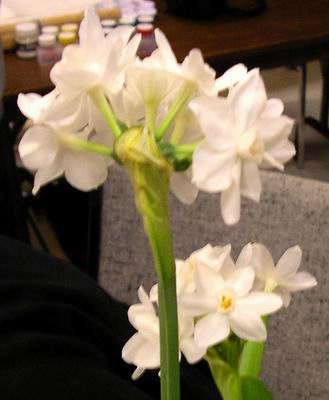 Moira added the green sepals first, which you can see just below the white flowers. 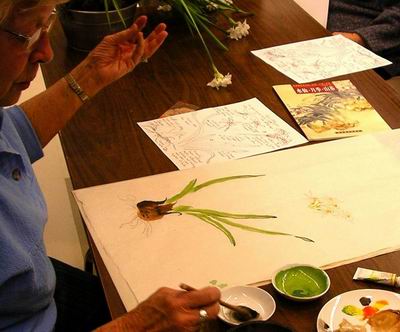 Moira used a brown pigment for the calyx where the sepals met. 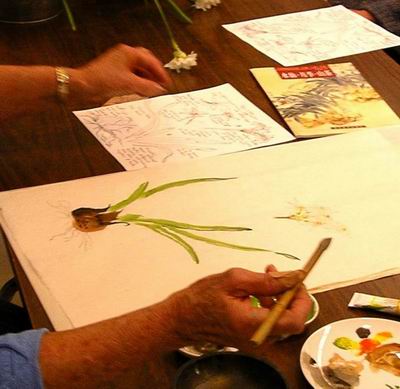 Using one stroke, as demonstrated earlier, Moira created the stem from the calyx to the bulb. 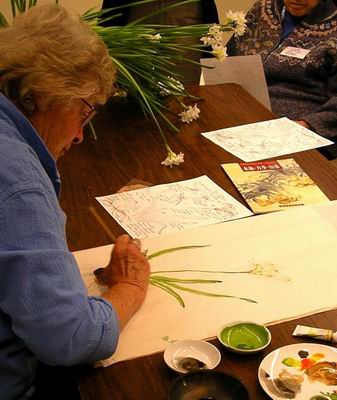 Moira added a few more stems and some details to fill in the painting. 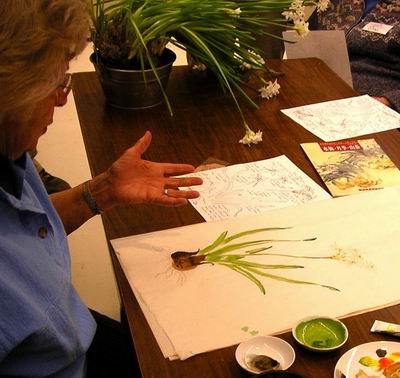 The additional stems included faded ones of a lighter green to indicate their more distant position. 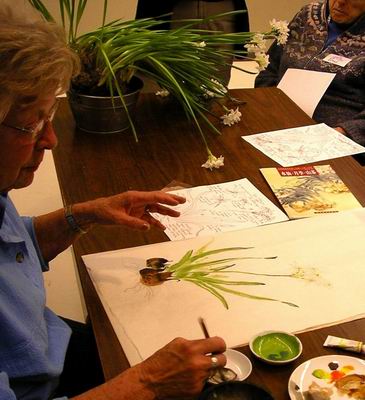 Moira next turned to mixing a cobalt blue, which was to be used as a background to the picture. 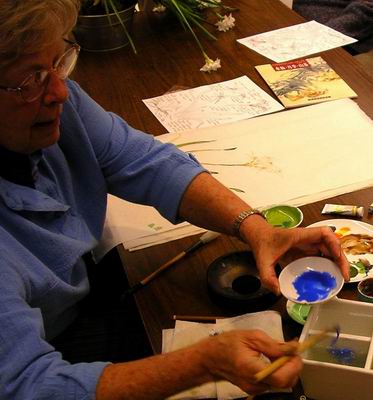 For the background blue sky, Moira suggested we start in the spaces between the flowers and then add the blue around the flowers to highlight them. 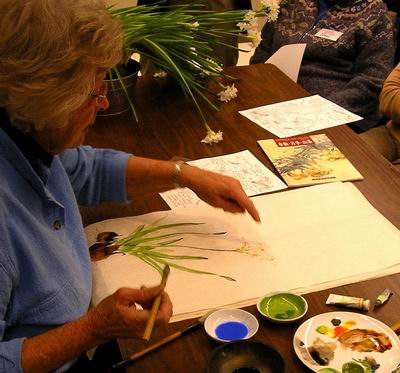 The blue ink was added between the flowers as a start of the background sky. It also helped distinguish the form of the paperwhite petals. 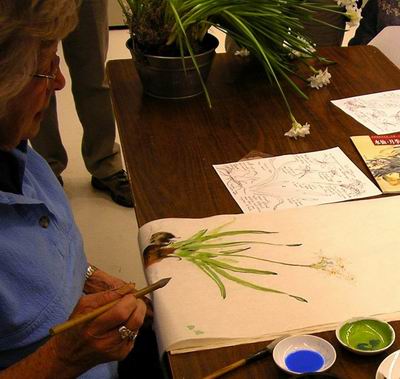 In the completed painting below, which Moira brought with her to the workshop, the blue sky background highlights the paperwhite flowers. 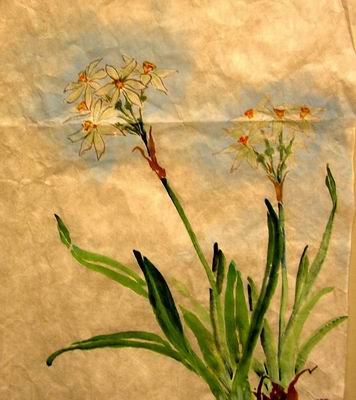 In another painting, the background blue is more faded but once again serves to bring out the paperwhite flowers in the painting. 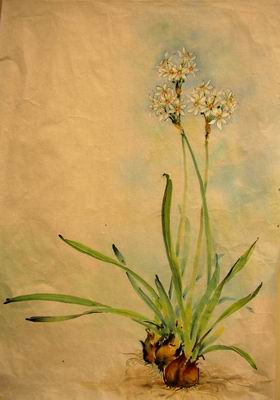 With the lesson taught, it was our turn to try our hand at painting these elegant flowers. Moira helped each participant one-on-one as we attempted one or more paintings in the second half of the workshop.