Shodo or Japanese calligraphy, like sumi-e painting, uses a brush to convey meaning beyond mere words. Noriko Maeda, shodo instructor at the Japanese Canadian Cultural Centre, began her workshop by giving the participants the choice of three words that they could work on in the class. In the picture below, they are from left-to-right: harmony, wind, and spirit.

Each word had three versions of the word: the oldest style was closest to a picture composed mostly of lines, the next style blended some continuous elements, and the last style, which was the most contemporary, had the word expressed in a continuous stroke. 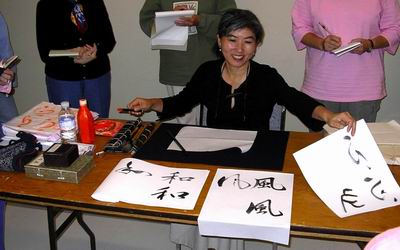 Of course, working on these words starts with understanding of how you should create them. Noriko demonstrated each word in the three styles. Instructors, by convention, create their works for a class in a different colour, in our case a bright orange. The brush is held in a similar manner to sumi-e painting, high on the handle of the brush and, like sumi-e painting, the complete use of the arm is encouraged. 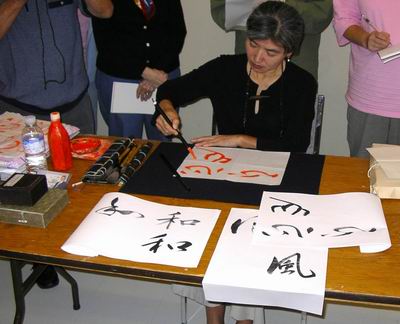 In the following picture, Noriko demonstrates the continuous style used to write the word harmony. 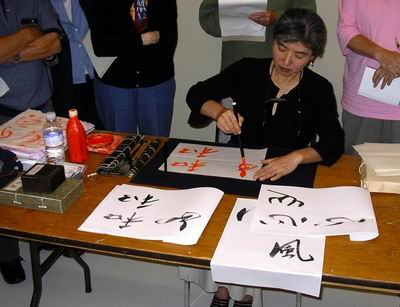 While demonstrating, an explanation of how the word was created over time was also added to the demonstration. For example, the word harmony evolved out of the picture of an ancient instrument that was associated with a harmonious sound. 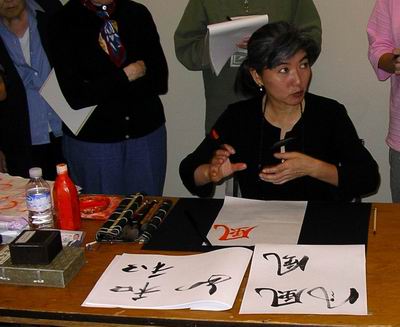 In an interesting side note, Noriko Maeda discussed the placement and size of a seal in a work of art. In this next picture, Noriko looks for the best place to put the seal in the shodo for wind. The seal should complement the work, yet be modest so as not to distract the viewer too much from the work itself.

Here's a tip for those of you struggling to get ink on your seal. Try applying the ink upside down! Noriko demonstrated that it is one of the best ways to get an even application of the special ink on your seal. 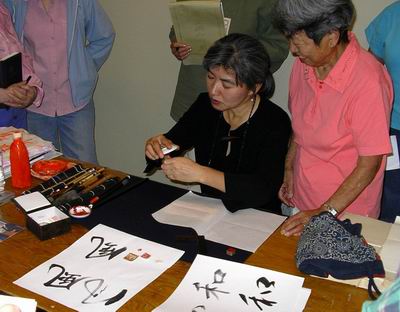 Do you always use red ink for your seal? Noriko showed us that there are other colours for seals and that they should be considered if you have a colourful painting where red is not suitable. 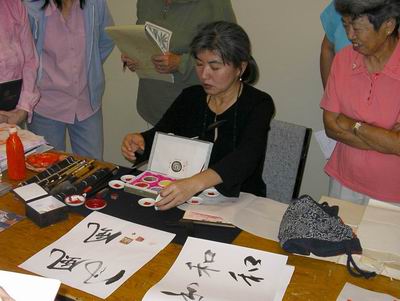 After her demonstration, participants spent the class working on the word they had chosen. Noriko Maeda provided hands-on instruction to participants, sometimes literally putting her hand around a student's and guiding the student through the strokes.

At the end of the class, Noriko discussed an exercise used by monks preparing to write shodo. They would draw a circle. Some students were asked to try. 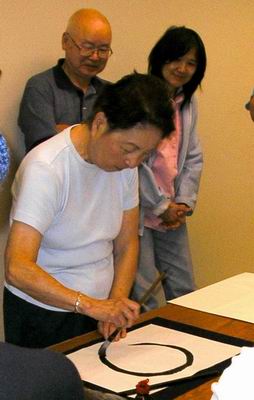 Noriko discussed how the circle itself was an indication of the state of mind of the artist. 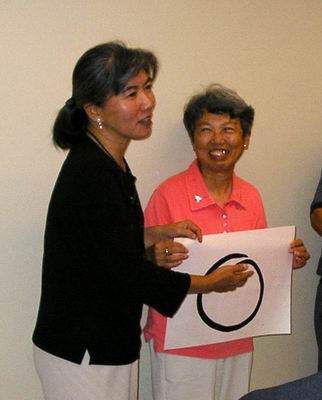 Like in sumi-e painting, a seal beside a circle must be placed in just the right place. 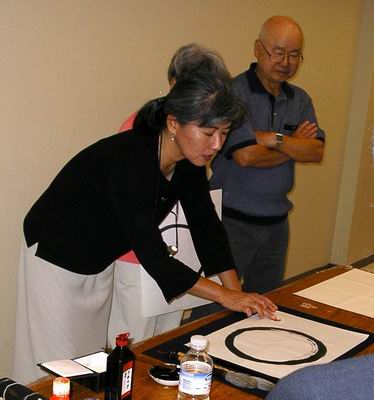 Noriko Maeda congratulated everyone on his or her hard work at trying shodo and encouraged all of us to keep up our practice. Since the Sumi-e Artists of Canada sometimes present their annual show with shodo from Noriko Maeda's students, we should have lots of examples to guide us.