Nature is the inspiration of almost all sumi-e paintings. Mountains, trees, streams, birds, insects, seen up close or in landscapes form the subjects of thousands of paintings created over the centuries. Most artists learn to paint by copying these paintings of nature. In our May workshop, we had the opportunity to paint nature in its original setting - outdoors.

Charles Leung, who has led numerous outdoor painting excursions, is an outdoor painting advocate. His motto, Nature is our Best Teacher, is supported by considerable historical evidence that many of the great sumi-e painters have worked outdoors themselves. We met at the International Taoist Tai Chi Centre north of Toronto, which is surrounded by over a hundred acres of spectacular natural sights.

Charles began by handing the members their outdoor kit. The kit was a piece of cardboard with 10 sheets of rice paper held to the cardboard with elastic bands. Charles also provided a portable set of paints in a plastic container. We had all brought chairs and brushes, the other important items. 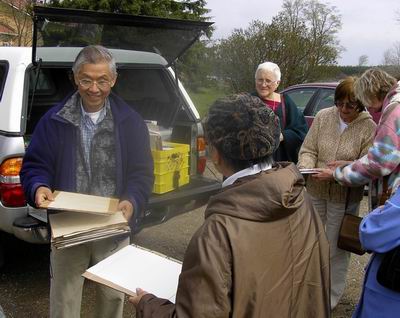 When you're surrounded by nature, it's hard to visualize how to put it into the context of a painting. Charles provided us with small rectangle view finders that when looked through provided the framework for a painting. 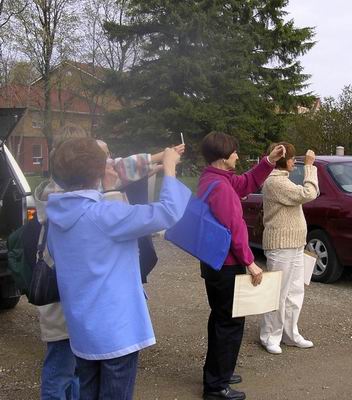 The sumi-e artists then ambled to a nearby pond and set up for a painting session. Setting up consists of finding a place for your chair. 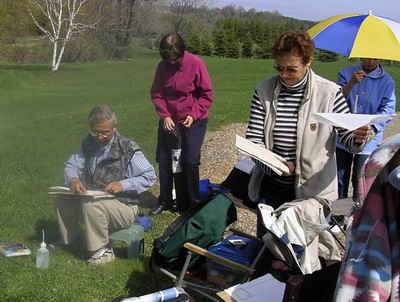 Charles showed how to work most effectively outdoors. The optimal way is to paint in a way similar to sketching, quickly capturing in some strokes the essence of the subject. Charles encouraged the participants in the workshop to use all 10 sheets of rice paper he had provided. He told us that if we had had an all day workshop, then coming home with 50 such paintings would not be unusual. Details and refinements to these sketches can be added later. 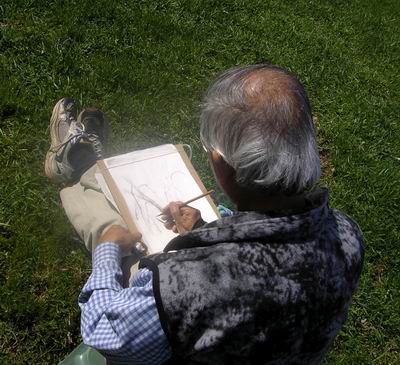 Then it was time for the sumi-e artists at the workshop to try their hand at outdoor painting. Everyone seemed to adjust to the outdoors classroom easily. There were so many sights to paint that you could throw yourself into a painting immediately. 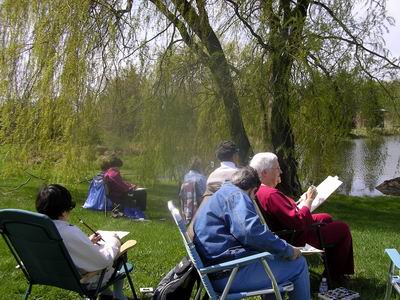 The group broke into smaller groups and individuals, each with his own perspective on a large-scale or small-scale natural scene. 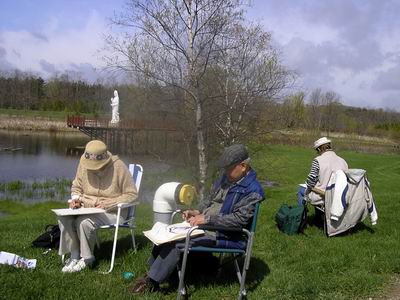 This group of three shown below worked on a look at the pond, a distant gazebo, and the vibrant tree before them. 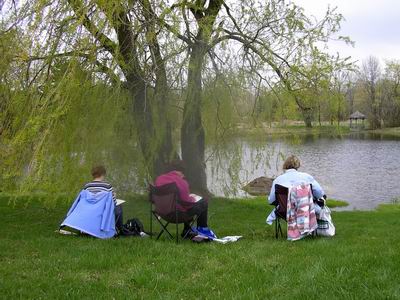 Charles provided tips and advice one-on-one with the participants. The woman below became fascinated by a stature of a Chinese god. Charles helped fit this man-made object into the natural world around it. 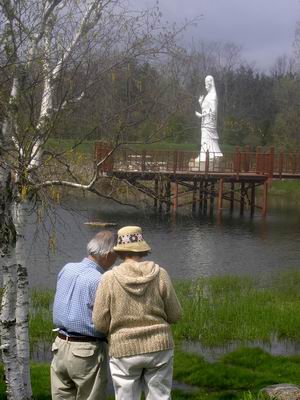 Another person received coaching in the outdoor technique when facing a real pond and real live and moving subject matter. 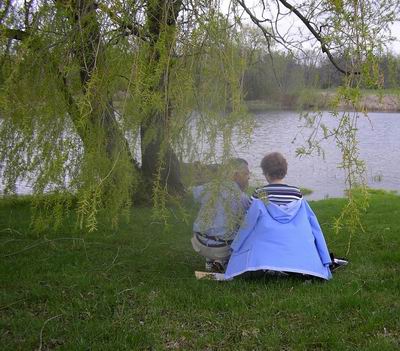 By the end of the session, all painters had become converts to the outdoor painting technique. Will we ever see them back indoors again? 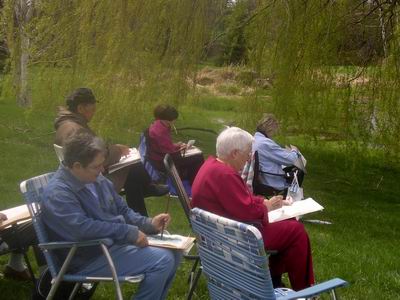 The outdoor sumi-e artists were convinced to put down their brushes for a picture of everyone including Charles Leung. 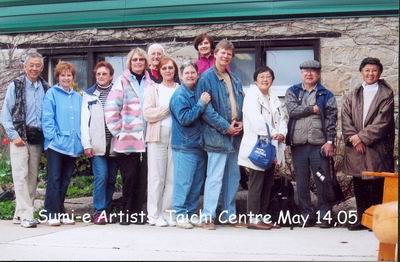