In Western art, the starring role is the historical, religious, or mythical human. In Eastern art, landscape is the preferred and even revered subject. The human figure appears in a minor and even insignificant role, or not at all. Hiroshi Yamamoto, sumi-e painting instructor at the Japanese Canadian Cultural Centre, led us in a workshop on landscapes, which also included a demonstration of mounting paintings and applying gold flakes for effect.

Hiroshi began by showing us how he gets ideas for paintings. He typically looks at his sketches, which he draws whenever he has the chance. 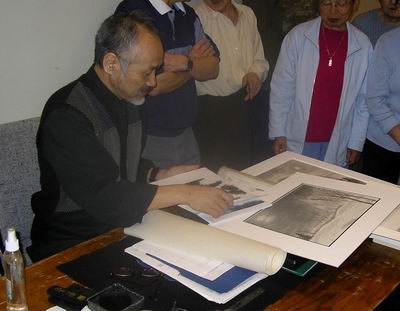 He opened a number of notebooks and suggested to the participants of the workshop that they also regularly sketch. Hiroshi uses colored pencils when he sketches. 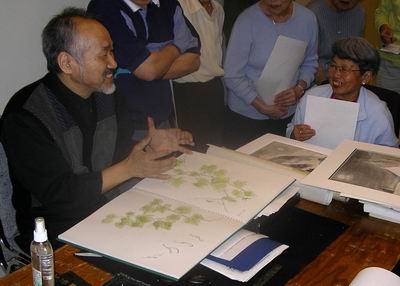 He then began his painting for the workshop, initially using charcoal and faint brush strokes to layout the structure of the painting, which was some rolling hills as seen in the moonlight. 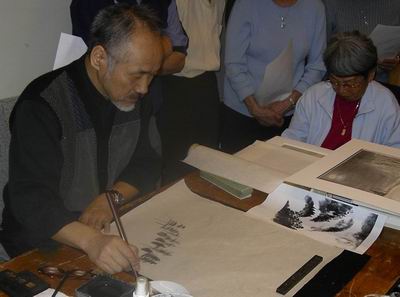 More strokes followed and the hills began to appear. Hiroshi emphasized that we use a dry brush initially and start with light ink. Dark black ink can always be added later for dramatic effect. 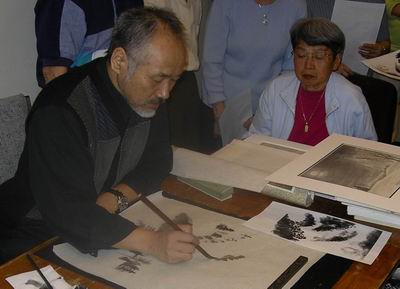 When it came time for the moon, Hiroshi showed us a tip: use a jar. 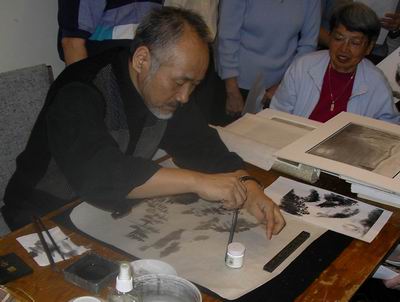 Taking the jar away revealed a perfectly round moon. 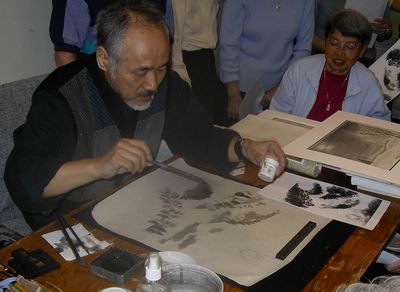 Hiroshi then sprayed the painting with water. He uses thick paper, which is necessary because the painting became quite wet. 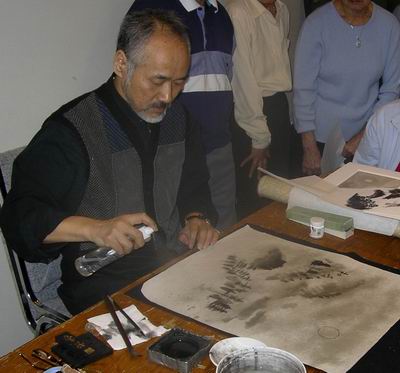 At this point, Hiroshi added more strokes to refine the painting. 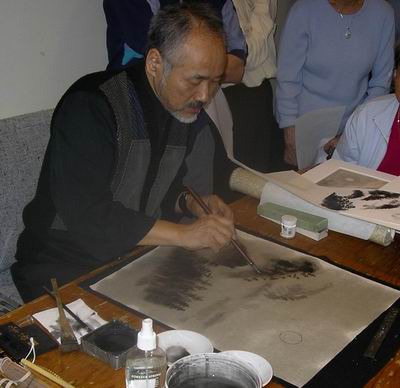 Some clouds were drawn across the moon. 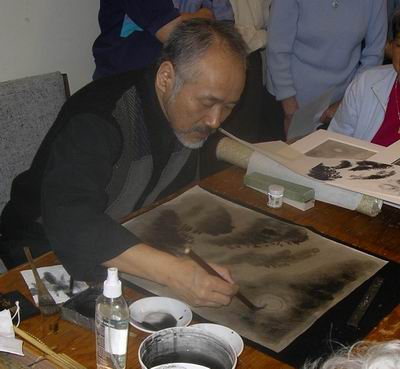 Hiroshi completed the painting and had the participants in the workshop try their hands at producing a similar painting, while he offered advice to each person. 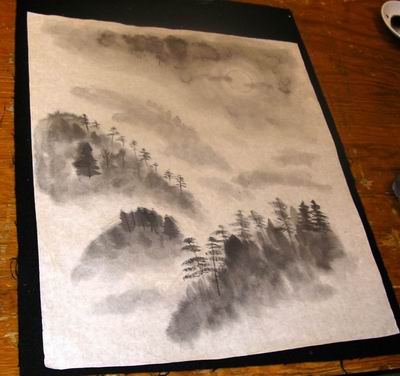 After we had drawn our own version of the painting, he returned to the front of the class to show us how he mounts paintings and how he uses gold flakes on paintings for artistic effect. 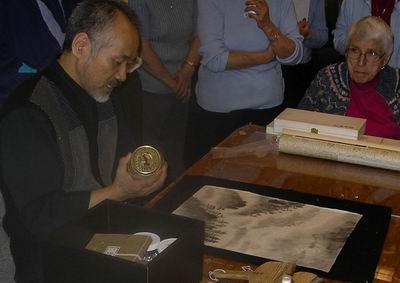 A wide brush is used to spread the glue and it is always started from the center of the painting and then worked toward the edges. The glue is made from flour. 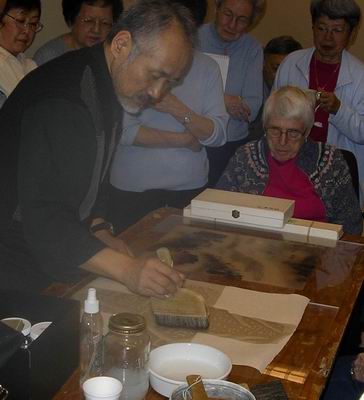 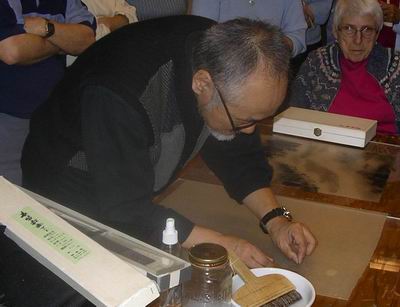 The painting is mounted and Hiroshi flipped the painting back to its front. 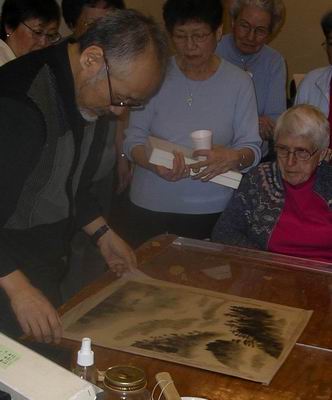 The wide brush again was used to smooth the work out, this time from the front. 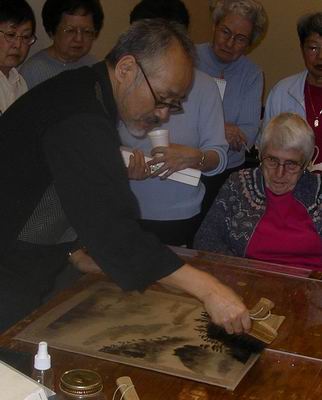 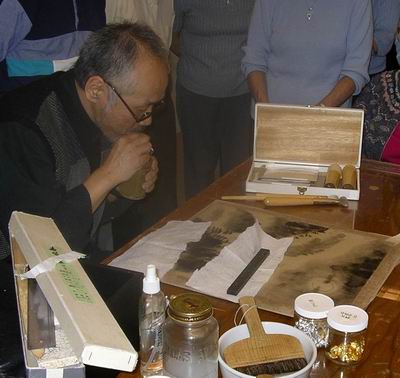 Hiroshi used bamboo tubes with screens inside to control the gold flakes added to the picture. 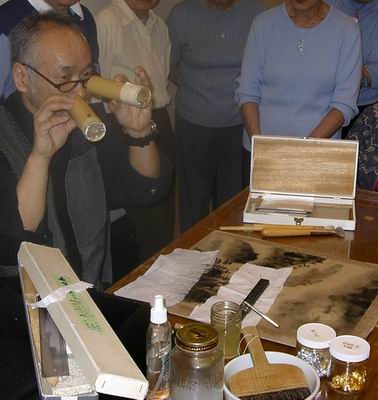 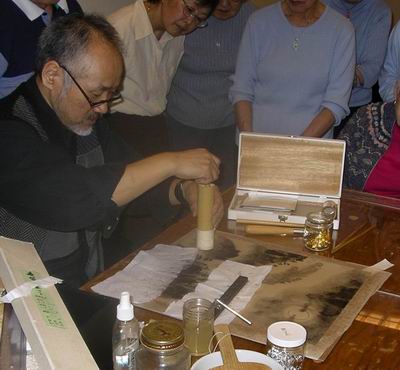 Excess glue and flakes were removed by applying an absorbent paper towel. 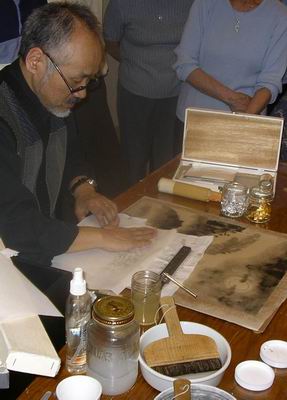 Hiroshi used the technique again on another section of the painting. 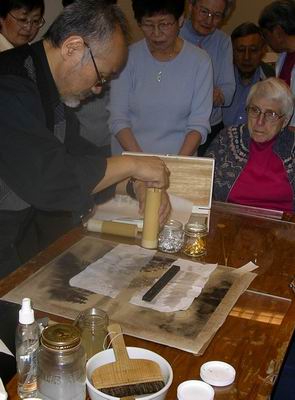 Hiroshi showed us the complete work, mounted and with gold flakes. The shimmer of the gold flakes will appear once the work has dried. 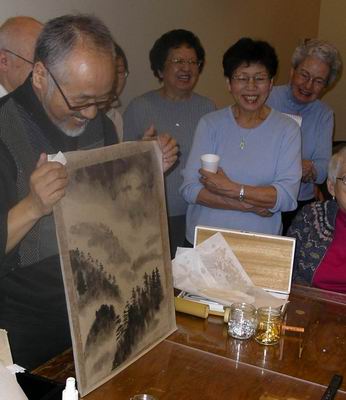 Hiroshi brought some of his work to show in addition to the piece he created. The work included this version of the same painting. 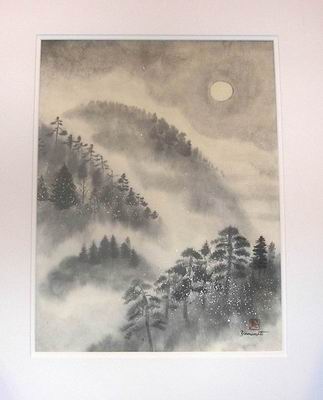 Another painting on display used silver flakes (aluminum, actually,which Hiroshi told us is more silvery than silver). Silver can be used effectively in winter scenes. 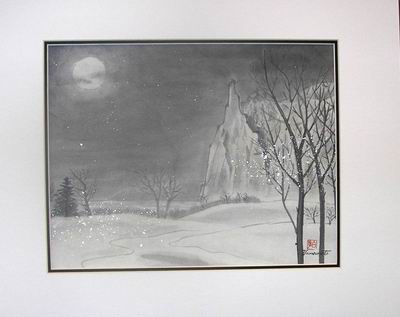